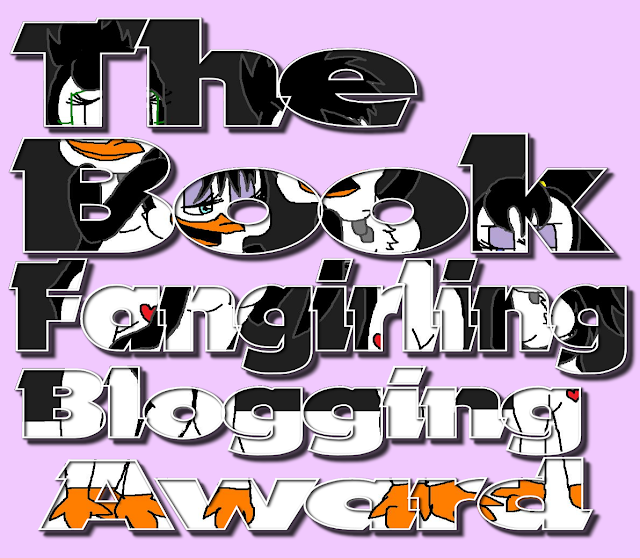 Well all of you beautiful people of Bloggywood, it appears that I Jeremy Crow have been nominated for yet another blogging award called "The Book Fangirling Blogging Award" which is only suiting because when most people think of books and fangirling, you know that Jeremy Crow is usually in the back of their mind. Yes the name Jeremy Crow has gone from the ranks of bumbling idiot to a five time named Beautiful Person, which is why I am forced to elevate the location of my blogs to Bloggywood, where the beautiful people, like myself reside.

Of course as far as the awards I have received go, this one doesn't even have a graphic that is worthy of posting so I was forced to make my own. Think about this for a minute while I have the podium! We have so many blogger awards out there that it is about as aggravating as a Facebook picture of a stick figure that says "Like and Repost or you eat shit!" but I digress because that is what beautiful people like myself do, we digress, say something inflammatory and insulting, digress, rinse replete.

I quote from the blogging award bible now. I don't actually know if this is a blogging award bible, but Adele Archer (who nominated me for this award, so I have 1 and 2 down, thanks a lot!) says they are so I must defer to her. Besides she is British and so was King James I think.

1. Read Award Post - Check!
2. Thank nominator - Check!
3. Answer their book related blog questions - Jury is still out on that one, but keep reading!
4. Invite 3 other cool bloggers - (why can't it be three butt reaming assholes that I would wish this on instead, sigh) - We'll see!
5. Nag the ever loving hell out of the people you nominate until they do it - (yeah I deviated from Adele's bible here but her 5a - c sucked aside from c which doesn't work I have tried)

Ok here goes the questions Adele dumped on us ...

1: My least favorite book is ‘Snow Falling on Cedars’. If my bed was a little wonky, I would probably prop it up with that. Which book would you prop your bed up with?

I would saw two more legs so that all three of the Twilight books can be used.

2: You’re only allowed eBooks OR real books for the rest of your life (now, don’t be pretentious), which would you choose?

Real books. I won't waste much of my time reading either and at least real books you can burn for heat in case of an emergency.

3: ‘Hunger Games’ or ‘Quiddich’, which is the suckiest sport?

That's a good one. I mean in the Hunger Games you at least could root for that idiot Jennifer Lawrence to die, but then again like those stupid Twilight books the people you wish would die never do, so I guess I would have to say Quiddich.

4: If your life story was made into a biography, what chapter would you ask them to leave out?

None. The worst ones become the funniest as I get older.

5: Bloggers are renowned for being a peaceful peoples, but which character from which book (other than Bella Swan from Twilight) would you most like to slap?

Someone obviously knew they were going to pick me as they wrote this. sigh Fortunately I have also read all of the Sookie Stackhouse and the Southern Vampires books before they were on HBO and Sookie should have the crap slapped out of her too.

Now on to the people I wish to curse with this wonderful honor (but look at the bright side at least I made an actual award for you to use) ...

My first nominee is Taylor Swift. I'm sure she hangs on every word of what I write.
The second nominee is Barack Obama. Be the first thing he does that doesn't make me ill.
My last nominee is Justin Beiber. I don't want people to think I am anti Canadian after all.

It was hard for me to narrow it down, but lets give honorable mention to the other people who were considered ..
The Brunette Guy from WHAM
Whatshisname from Dexy's Midnight Runners
The Indian from The Village People

Which of Jeremy Crow's Cyber Novels do you find has the greatest significance on the social issues of today?

What book have you read, where you were forced to say, "That book sucked, the movie was so much better"?

What was the first book your parents ever read to you? (and don't tell me you were too young to remember, that's a cop out)

Which of Jeremy Crow's blog posts do you think will finally get him that Nobel Prize? (let's face it anyone can get one)
Posted by Jeremy Crow at 11:58 AM