My reviews of family movies on my own site are very popular. So much, in fact, that people often ask me to review films geared toward mature audiences. Ones that for either content or subject matter are not made for those under 18.  However, I always say I am not going to start that because sometimes I just want to sit down and watch a film for enjoyment. 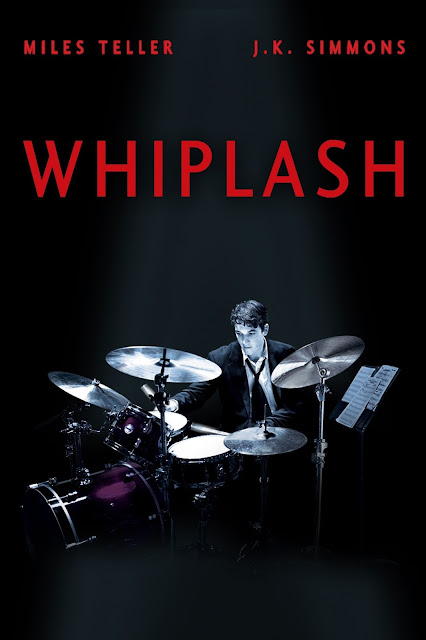 I am making an exception with this mini-review because this film left me breathless.

Last night I finally sat down and watched Whiplash which was nominated for five 2015 Academy Awards including Best Picture.


First let me say that this film is not for everyone. Don't expect The Hangover or even American Sniper.  This is an artsy film with brilliant directing and editing and superb performances by Miles Teller (Andrew Neiman) and J.K. Simmons who won the Oscar for Best Supporting Actor for his portrayal of the crazed music instructor, Terence Fletcher.

The story centers around a young drummer, Andrew, who is a student at the top music conservatory in the nation. As if competition among these best of the best musicians isn't enough, Fletcher's narcissistic and abusive style of teaching (if one would even dare call it that) often pushes the members of his elite band to the point of breaking.  Andrew, obsessed with his own success, easily falls victim to Fletcher's tactics, jeopardizing his own sanity.

Before sitting down and watching Whiplash last night, I had no idea what this film was about. If at some point I did know, I had forgotten. The screenplay, although not a true story, is inspired by the writer's, Damien Chazelle, personal experience as a drummer - making the film even more fascinating, yet, I hesitate to say shocking because of my own background as a music student.

Music lovers, particularly fans of jazz, will delight in this dynamic film. For those that are tired of the usual romantic comedy or shoot 'em mobster film, take a chance on this one. I can't even clearly define what it is I loved about this film. The music - definitely. The performances - absolutely. But there is something more I can't quite grasp.  Whiplash was just one of those films that captured my full attention from the opening scene and held it up until the closing credits. Intense and captivating do not even begin to describe it. If you're looking for something different for your next movie night, give Whiplash a watch.

Whiplash is rated R for strong language including some sexual references.

Posted by Lavender Inspiration at 5:00 AM