"You're done with the past, but the past is not done with you."  ~ The Gift 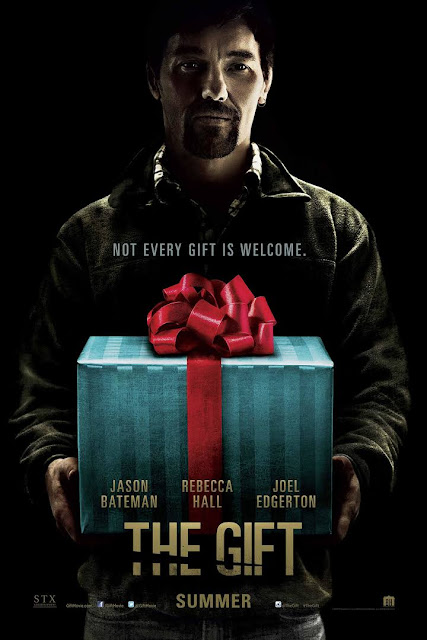 I don't do horror films, but I do love a good thriller, and The Gift starring Jason Bateman (one of my favorite actors) certainly makes the list of top revenge films EVER and will have you asking yourself, "How well do I really know the person I married?"

The story takes place in California as Simon (Bateman) returns to his childhood neighborhood with his wife Robin (Rebecca Hall) to begin a new life.  The couple runs into one of Simon's old high school classmates, Gordo, played by the very creepy Joel Edgerton, who also directed the film.  The tension from that moment on builds in what is to be a web of lies and secrets from the past - ones that will not go away easily - ones that will continue to haunt.

"I believe that the bad things in life, they can be a gift."  ~ The Gift

In this psychological thriller, the viewer is constantly asking, "Who is the bad guy?"  The Gift (without giving away spoilers) deals with the very real and frightening themes of the cycle of abuse and the psychology and long-term effects of bullying.

The Gift is one of those films that will have the viewer yelling at the characters - "Stupid, Stupid, Stupid!" You know the characters should be on guard; you're angry they are so trusting. Unfortunately, and thankfully because it makes for a hell of a movie, they don't listen to you and you are led through one twist after another. This movie will have you on the edge of your seat.

"Time gets rid of a lot of things. It heals everything.......It's really important to not look back."  ~ The Gift

But is that so easy? Certainly not when one incident, 25 years earlier, changed a person's life forever. Not when one person gets "stuck in a moment" and refuses to let go, or make peace (depending on your perspective).

This 2015 psychological thriller is available now on DVD and makes the perfect date night film. I highly recommend it.  The Gift is rated R for language.

Posted by Lavender Inspiration at 9:36 AM